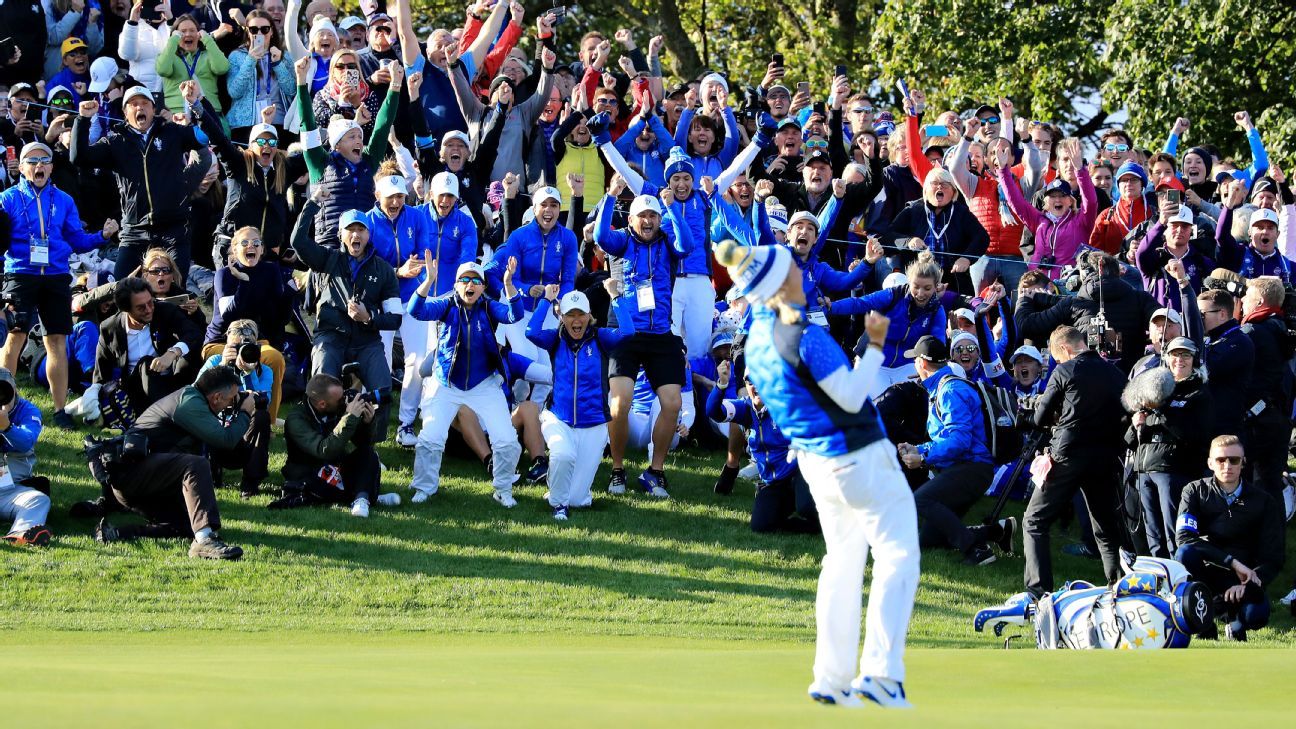 A sleepy September it is not. Golf sprung alive over the weekend at a time of year when fans are typically preoccupied and the transition from one golf season to the next is blurred.

Give credit to a stunning Solheim Cup — which, in truth, should not have had to share the stage — and the ability of these team competitions contested as match play to almost always deliver.

The women’s game got a huge boost, while golf fans were treated to fantastic drama.

And that was not all. Sergio Garcia won again on the European Tour, while one of the youngest players to win in PGA Tour history, Joaquin Niemann, prevailed in the PGA Tour’s season opener.

Here’s why this past weekend was such a big deal.

The Solheim Cup, first staged in 1990 in nearly exactly the same format as the Ryder Cup, has rarely failed to deliver. The 2019 version almost certainly topped them all.

Never more than a point separated the United States and Europe following any of the first four sessions, with a tie heading into Sunday singles. And from the outset, the competition at Gleneagles was fraught with tension, as the Europeans surged to an early lead. The Americans battled back to flip a few matches and appeared headed to retaining the Cup, only to see an epic European rally capped by Suzann Pettersen’s do-or-die birdie putt on the 18th hole.

One of the aspects that makes the Solheim Cup (and the Ryder Cup) so compelling is that the competition is nearly always close, with final-day nerves in place no matter the lead or deficit.

But to come down to the final hole? With only one match left on the course? And only one more person with any shots to play?

The situation was nearly identical at the 1991 Ryder Cup, where Bernhard Langer was faced with a make-or-break putt on the 18th green at Kiawah. Make it, and Europe retains the Cup; miss it, and the Americans prevail for the first time in eight years.

Langer’s 6-footer — yep, same distance as Pettersen’s — missed, meaning a tied (new terminology; back then it was “halved”) match with Hale Irwin and a 14½ to 13½ victory for the United States.

Pettersen, 38, a controversial captain’s pick by Catriona Matthew due to her relative inactivity — she had played just three official tournaments over the past 20 months due to the birth of her son a little more than a year ago — was nails, wedging her third shot to 6 feet.

Then, after American Maria Alex missed her 12-footer for birdie that would have assured a U.S. victory, Pettersen made her birdie putt to win it for Europe.

“I mean, can you ask for more?” Pettersen said in the exuberant aftermath.

And then — mic drop — Pettersen retired. Not just from playing in the Solheim Cup, but from competition.

“This is a perfect closure,” she said. “The end for my professional career. It doesn’t get any better.”

While Pettersen was calling an end to her career, Joaquin Niemann was just getting started. He became the first golfer from Chile to win on the PGA Tour when he captured A Military Tribute at the Greenbrier, the first event of the 2019-20 season.

Niemann is just 20 years old and became just the third player born outside of the United States — joining Seve Ballesteros and Rory McIlroy — to win before the age of 21 in the past 95 years.

A winner of the 2018 Latin America Amateur Championship — which earned him a trip to the Masters as an amateur that year — Niemann will now head to Augusta next spring for the first time as a pro.

He did it with a 62 in the second-round and won by 6 strokes, capturing a victory in just his 44th PGA Tour start.

Niemann was seemingly destined for stardom, but had his share of struggles after first turning pro. And yet, he’s still just 20 and now has exempt status for the rest of this season as well as a slew of perks.

“It’s been unbelievable for my whole country,” said Niemann, whose country has only about 60 golf courses. “They were watching me, I got a couple of texts from them, so really happy to get the trophy for my family, for my coach, and everyone back there in Chile.

It’s been a tough year for Sergio Garcia. The 2017 Masters champion made headlines for all the wrong reasons, including a disqualification from the Saudi International tournament — an event that was controversial just for being there — because he purposely damaged several greens in anger.

Garcia didn’t even qualify for the second FedEx Cup playoff event, and his only top-10 finish going back to May was at a tournament he hosts in Spain. Along the way, there were four missed cuts and lackluster showings in the major championships. He had fallen to 43rd in the world.

And then he won Sunday in Amsterdam.

Garcia, 39, captured the KLM Open, his 16th career European Tour title and first since he won the 2018 Andalucia Masters.

“We had a great win and great to win again,” said Garcia, who now has won in straight years on the European Tour. “I played well all week under pressure. It wasn’t easy. There were a couple of tough moments today, but I hung on tough, that’s the most important thing.”

Garcia jumped to 32nd in the world — he was 24th when the year began — and perhaps this is a new start for a world-class player who had lost his way for most of this year.

In the aftermath of a riveting Solheim Cup, inevitably European captain Catriona Matthew was hailed as a genius, while U.S. captain Julie Inkster — who was bidding to win three straight Cups — had some of her decisions questioned.

Why, for example, were the Korda sisters rested on Saturday afternoon (they were 2-0 as teammates and each halved their other matches with a different partner)? Why was more strength not put at the back of the lineup for Sunday’s singles?

Conversely, Matthew was hailed for the way she set her Sunday lineup, with three players in the last three spots all delivering victories.

As usual, captains get too much of the blame or the credit.

Case in point: If Suzann Pettersen missed, is Matthew then a flawed captain? And if Marina Alex had made her putt prior to Pettersen’s — thus clinching the Cup for the U.S. — is Inkster suddenly a genius?

Anytime slow play is called out, it is a good thing. The more it is decried, the better chance there is for some sort of effectual change. The Solheim Cup was not without this blight, as players were actually put on the clock and threatened with losing holes with another bad time.

It never came to that — and it would have been incredibly difficult to enforce such an action — but six-hour rounds in the four-ball format both Friday and Saturday were a horrendous look, and had to be brutally difficult for spectators at Gleneagles who battled their share of blustery elements.

While not excusing the slowpokes, it is best to keep something in perspective. At PGA Tour events, three-balls during the first two rounds routinely take longer than 5 hours to play, often pushing 5 hours, 30 minutes. This is due in part to field size — not an issue at a Solheim Cup (or Ryder Cup or Presidents Cup, where this is also an issue) — but it nonetheless highlights the pace that has become normal.

Add in an extra player in four-ball, meaning an extra tee shot and approach shot on every hole — plus the inevitable added discussions for strategy purposes — and it is going to take longer than what has come to be normal. Throw in the brutal weather conditions on Saturday in Scotland, and you have this arctic pace.

At some point, the powers that be need to find a way to change what is now considered normal. Five-hour-plus rounds are not normal, but have become that way at the professional level. Reducing field sizes when possible, being quicker to penalize and acknowledging that issue would be a good start.