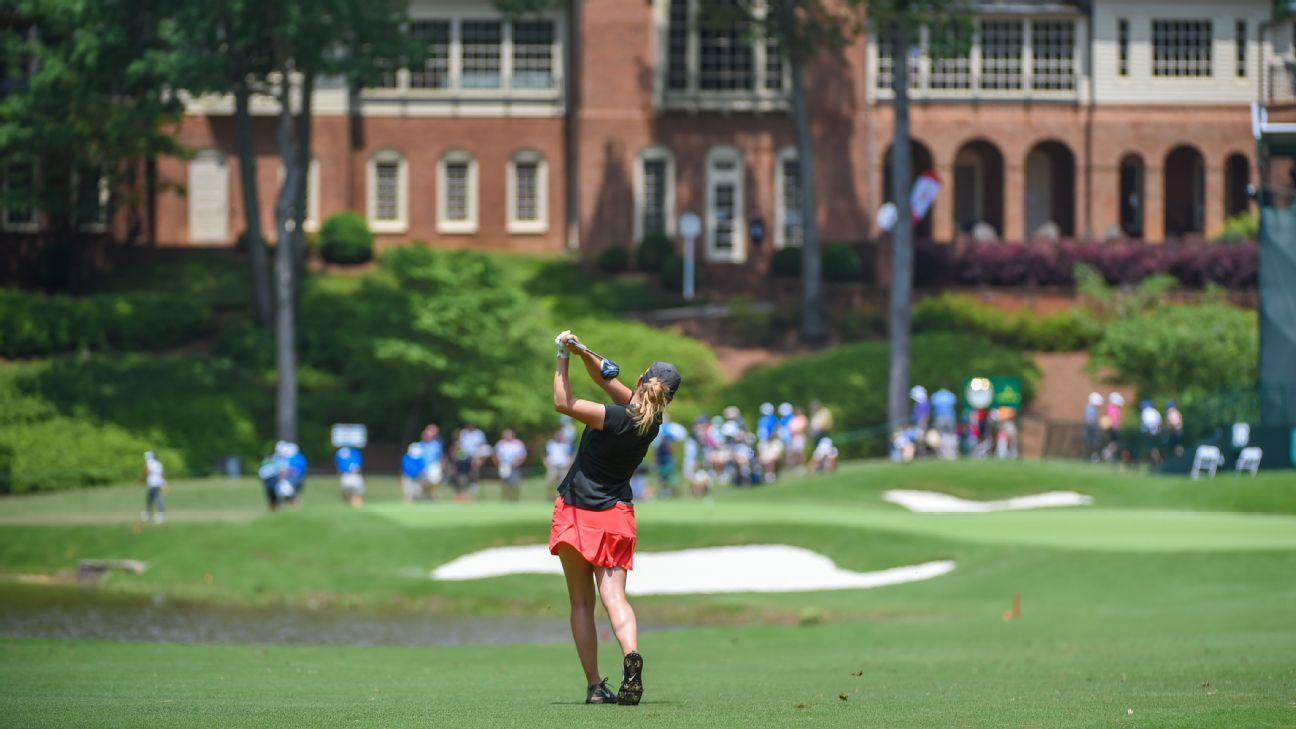 LPGA Tour hopeful Celia Barquín Arozamena was murdered at Coldwater Golf Links in Ames, Iowa, on Sept. 17, 2018. Collin Richards pled guilty to first-degree murder on June 14, 2019, and was sentenced to life in prison last month. On the one-year anniversary of Barquín Arozamena’s death, South Carolina senior golfer Ana Peláez Triviño, her teammate on the Spanish national team, salutes her beloved friend, the 2018 Big 12 Conference champion from Iowa State. Peláez Triviño and the Gamecocks are in Minneapolis this week for the Annika Intercollegiate — exactly where she was last year when she learned Barquín Arozamena had been killed.

I have my friend Celia on my mind every day. I don’t need the things I carry in my golf bag to remind me of her, but I carry them anyway. Every single tournament, I play for her. I know she’s up there wishing us good luck.

We met a long time ago. I think I was 9 or 10 years old when we met in a camp that the Spanish Federation had for kids who won the national championship. It was my first time going to Real Federación Española de Golf, the Spanish Golf Federation course in Madrid. It was a dream come true for a kid who plays golf.

I admire people who are older than me. I want to learn from them, because I feel they have a lot of experience. I always looked up to Celia. She was three years older than me, and at that camp I wanted to do the same thing she was doing. This was my first time, and she looked like she knew what she was doing. She told me how nice the Spanish Federation was and how cool the camp was, and she couldn’t wait to come back. When we said goodbye, I said thank you very much for everything. I never thought I’d compete with her or have more camps with her, but I eventually saw her again.

In Spain, we have a high school specifically for athletes. Because she was three years older than me, we couldn’t be together in that high school. But we got close once I was selected to play for Spain’s under-18 team at the European Championship a few years ago. She was on the women’s team, and we always had a camp together before the championships, where the under-18 and women’s teams practiced against each other.

We’re all Spanish, and we love talking. We would have conversations. Her last year as a senior in college, 2018, we played on the women’s championship team together. That’s where we got really close.

I remember last July, at the European Ladies Amateur Championship in Slovakia that she won. The whole team was staying in a really nice house. We sat at a long wooden table on the patio at the back of the house, watched the sun set and talked about life. She was FaceTiming her boyfriend, Carlos Negrin Bolaños, and I told her — because I love to annoy people — “Are you going to get married?” … And she told me, “You know what? I never thought about it, but yes. I know he’s the love of my life. I know he’s the one.”

She said, “I have some friends who come to me and say, ‘I met this guy, I think I want to date him, blah, blah, blah.'” She said, “If you’re doubting if that’s going to be the person for your life, then he’s not, because you know it. That’s how I feel about my boyfriend. I just want to graduate, turn pro, be with him and see my family.” She was telling me how happy she was, and that eventually the hard work was paying off.

And she was such fun to be with. A few weeks earlier we played at the European Team Championships in Austria, and the place where we stayed had these huge inflatable horses they put in the swimming pool. She jumped on one laying on the grass and was like, “Take a picture! Take a picture!” I’m like, “Why would you want a picture with a horse?” As soon as she sat on it, the thing fell over. And I’m like, “I’m so happy you asked me to take your picture, so I could capture the moment you fell on the ground. You’re not even in the water.” We both laughed.

Last summer our team set up a group chat on SnapChat, and we kept in touch once we went our separate ways. She loved to cook, and she used to have an Instagram account about her meals, so she would send some SnapChats about her food, maybe something about her boyfriend, things like that.

The day I learned Celia died was the first day of the ANNIKA Intercollegiate tournament near Minneapolis — Sept. 18, 2018, the morning after it happened. I woke up at about 5:30, looked at my phone and saw a lot of messages from my dad, my brother and a friend back home. It was weird that my brother would text me, honestly. I could just read the beginning of it. I’m trying to translate: “Life is very hard, but we’re here to support you, and we’re always …” and then I couldn’t read any more.

I got scared. My dad’s text said, “Call me when you can.” I jumped out of the bed. First I thought something happened with my family. I called my dad: “What happened? What happened?” He told me what happened: Celia was playing on the golf course, and a guy took her and killed her.

I could not process the information. I just started saying, “No, no, no.” I had to end the call. I got out of my room and asked my teammate Anita [Uwadia], “Where’s Coach, where’s Coach?” She was like, “What’s going on?” I could not tell her what happened. Coach [Kalen Anderson] knew already, because my dad had called her. I just gave her a hug, and then I cried and cried and cried.

When I got to the golf course I saw Shauna [Taylor], the coach from Arkansas. She gave me a hug and told me, “The best thing you can do for your friend is play great today. This is what she would have wanted for you today, to play good.” So that’s what I did. The first day had been rained out, so we played 36 holes that day, and I shot 75 and 70. I shot another 70 the final day.

I think about Celia every day. We have a captain with the Spanish Federation who gave us bracelets with something Celia said in Spanish: “Everything counts. The good, the not so good and the not so bad.” I carry that in my bag every day. And I have a ball marker with the outline of her body on it.

For people who want to know about her, I can only say she was the most wonderful person on earth and the most committed person to the people in her life. She took care of her friends and her family. That’s how we should remember her forever. If you needed help, she would have been there. That’s what I loved the most about her: Simple, honest, hard-working and passionate.

And her hugs were the best. You could feel the love.