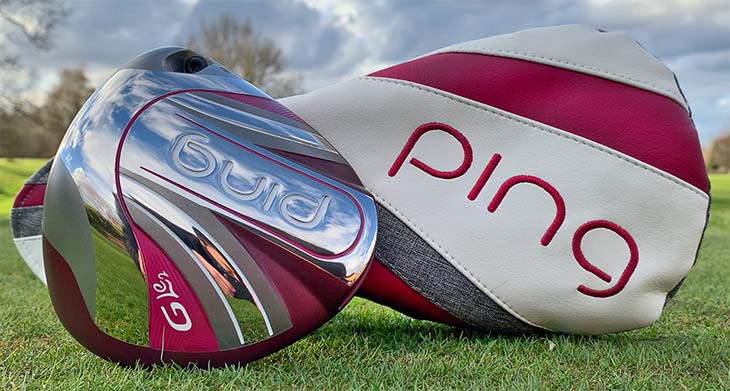 When asked to name a women’s golf equipment brand, Ping is the name that comes to mind. Why?

Well, many people don’t realise that The Solheim Cup is named after the Karsten Solheim, who is the founder of Ping, and the biggest event in women’s professional golf is still supported by the family to this day.

Therefore women’s golf and Ping go hand in hand. The support I received from them during my time on tour was really appreciated and it was the most used brand by golfers on the Ladies European Tour during my time. Ping set the benchmark for women’s golf equipment a long time ago and the other companies are starting to catch up.

The latest generation of the G Le range, G Le2, features a new colourway with a dark plum replacing the deep green-blue of the original GLe.

You can watch my full review via the Golfalot YouTube channel here:

What’s The Difference Between The Men’s And Women’s Model?

The technology in the new G Le2 range compared to Ping’s newest men’s clubs, the G425 range, is pretty similar. The main differences that you’re really going to be able to see and feel are the length of the clubs (shorter for more control), the shafts are lighter (to help promote more speed) and grips are smaller (to help women, who usually have smaller hands, grip the club correctly).

We want the club to be nice and lightweight to generate better club head speed and ball velocity without requiring any greater effort. Ping offer a version of their ULT240 shaft in both Lite and Ultra-Lite, while the grips available are Golf Pride Garnet 360 Tour Velvet – nice and thin and super tacky! 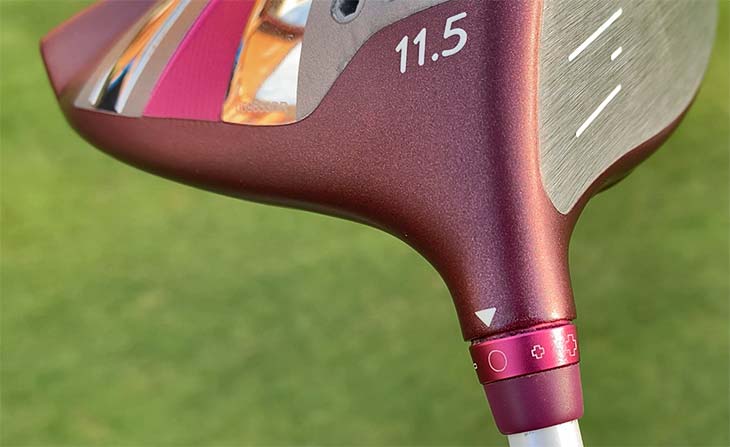 When you address the golf ball it is really easy to line up both the face and ball, due to the colour contrast between the grey face and plum coloured head and i also thought the plum head looked great. 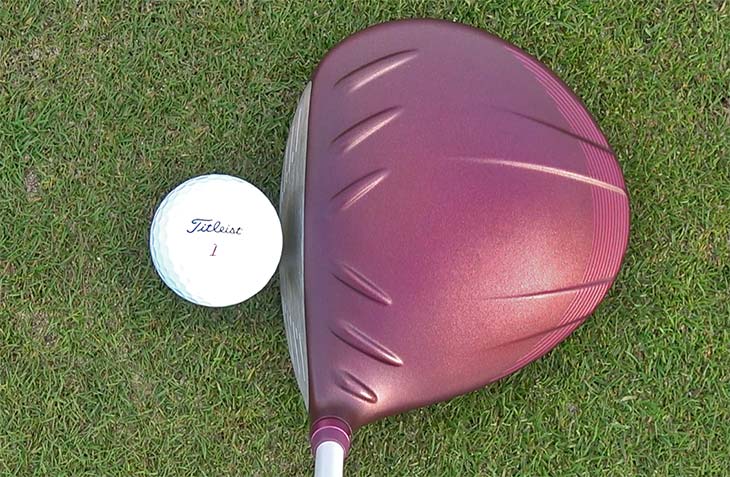 I tested an 11.5 degree head with the ULT240D Lite shaft, although if you really struggle with generating speed and aren’t as physically strong as your peers then you can always try the Ultra Lite option.

The Garnet 360 Tour Velvet grip is very sticky and helps to keep a consistent hold on the club, particularly if you’ve got smaller hands. I’m often using hand cream or suntan lotion when I play so my grips need to be tacky, and these were great.

The sound of the driver at impact is higher pitched than most drivers you will try (with a name like Ping I suppose this shouldn’t be surprising…), but the reliability of the strike and straightness of the shots should make up for the sound if you did think this might bother you. 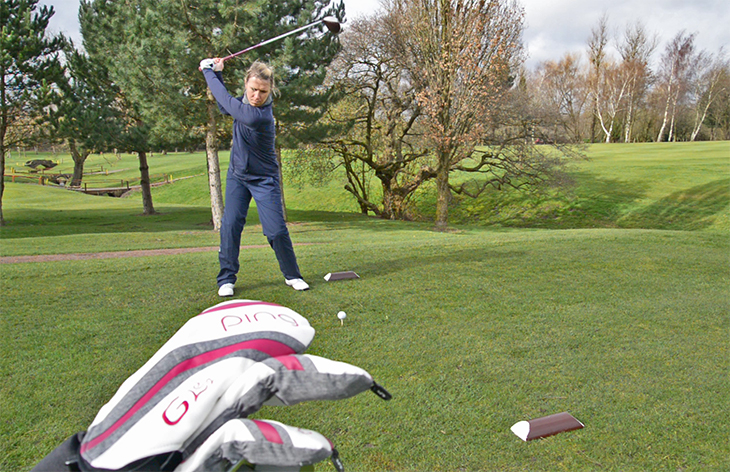 With a draw-biased head and plenty of loft the balls were flying high and down the middle. This really is a beautiful looking club and a very forgiving one. If you hit the fairways with less side spin and decent height then the ball will run further on the short cut grass, and this is what I found whilst testing the driver around Denton Golf Club.

The driver essentially has all of the same features as the G410 Driver, and is pretty similar to the new G425 apart from the fact that there is no adjustable weight in the back.

I found it to be a really dependable driver with a bit of extra swag in the colourway, and at £399.99 it’s coming in £50 cheaper than the G425 which is also a bonus…

If you need a driver with less loft or do not want the draw bias you will need to move into the men’s models and request a lighter and shorter length shaft than standard during your fitting. 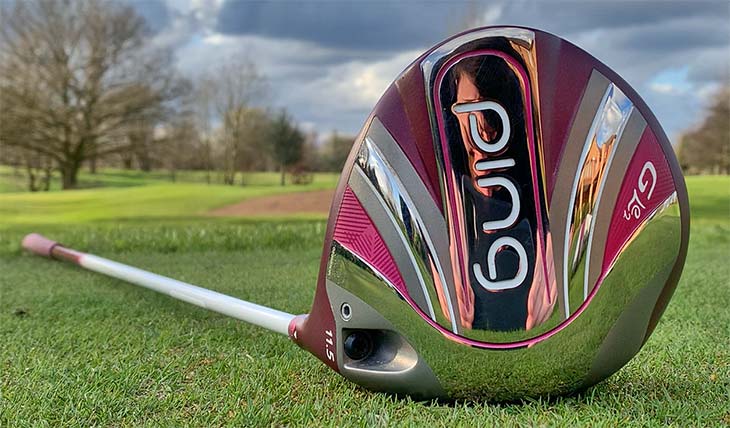 For the extra £50 I’d advise you to get the G425 instead as there are more fitting options, but it will be a different colour so if you have a matching bag and clubs then you may need to change your head covers! 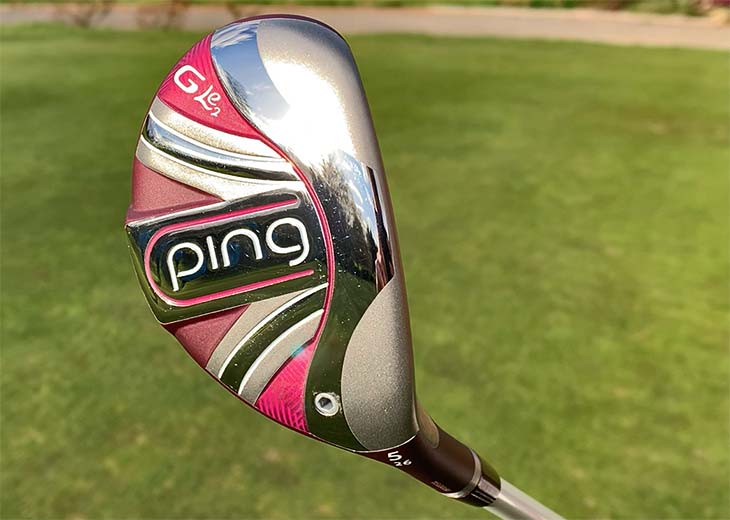 The G Le2 Fairway is the best looking club in the GLe2 family, the softer crown shape and the turbulators help frame the ball at address and aid alignment. 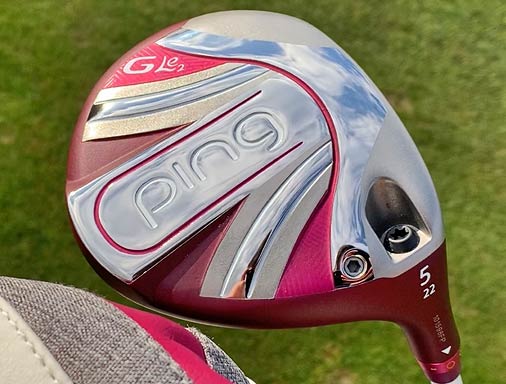 The heads are smaller and compact but still give you the confidence that you aren’t going to mishit the ball and to generate club head speed even when hitting from the rough.

I tried the 5 wood and it launched very easily and really high, maybe a touch too high for me due to the loft and low kick point in the shaft. Although it’s not too often that you have to worry about hitting a fairway wood too high. Height equals carry, carry equals distance. 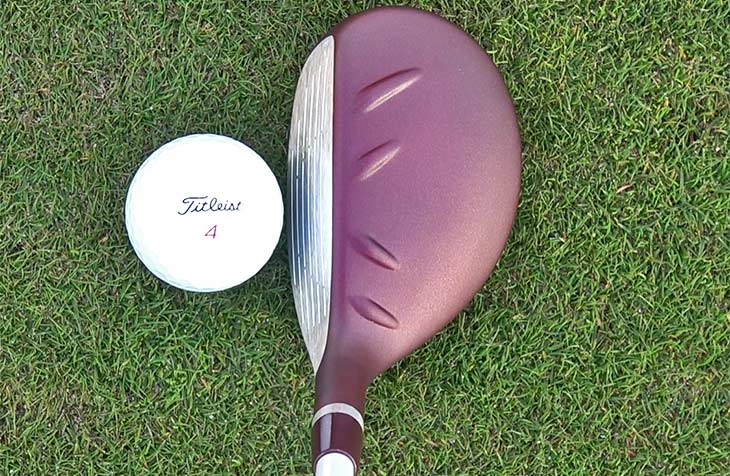 The G Le 2 hybrids sit really nicely and blend well from the 7 iron into the rest of your ‘headcover clubs’. In terms of performance, the yardages are very similar to the 6 iron but the hybrid flies higher and stops more quickly, making it ideal for carrying water and bunkers especially when you’re hitting to a green.

The irons are available from 6-SW with lofts that are very similar to the men’s G425 irons. The 7 iron comes in at 30.5⁰, but the length is half an inch shorter and the weight is much lighter.

The lie angles can be modified according to Ping’s colour fitting chart, and as always we’d advise that you get fitted or speak to your local PGA Professional for these to ensure you have the right setup for your own game and swing.

These irons did remind me of Ping G425 irons as they’re in a stealth metal finish with a thin top edge, with just the plum colour added in too. 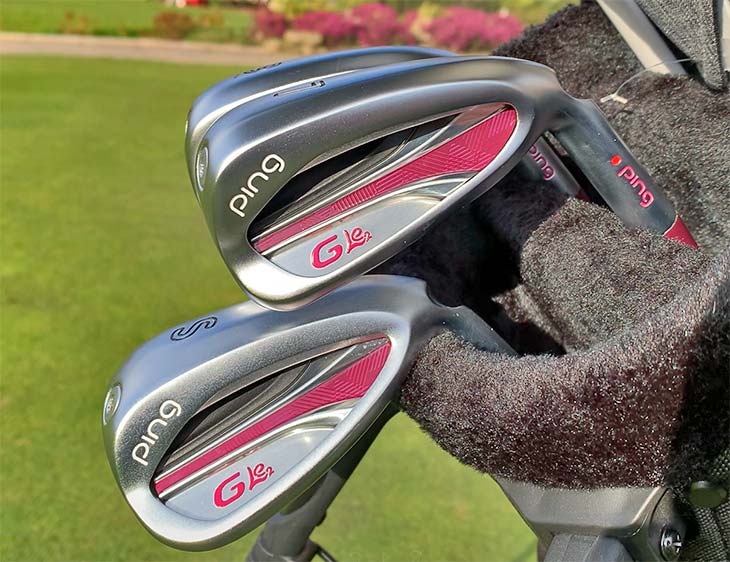 Looking down at these at address they were a little thinner than I was expecting them to be, but when you turn the club over you can see the large wide sole which is going to help with turf interaction and make the club feel more forgiving. This should stop the head digging into the ground and slowing down too, meaning that you should get the ball up into the air more easily.

I don’t like my irons to look too oversized or clunky on the end of shaft, but these didn’t do that and they managed to improve performance whilst still looking relatively compact.

Like the driver there isn’t quite the latest technology in them, instead they seem to be one cycle behind in this, which is again reflected in price at £630 for a 6 irons setup.

However I have to say I really enjoyed using these irons and felt as if I could shape them both left and right with ease and get plenty of high with a fair distance too.

I played plenty of chip shots and bunker shots with the wedges during my testing. They were excellent for all types of shots from lobs over a bunker to simple chip and runs. The size of the head and the larger sole made getting out of bunkers really easy as the club bounces through the sand rather than jabbing into it and stopping.

I had nothing but love for these irons. They have very true lofts too, so they aren’t super long or low spinning like the G710 models.

If you need max distance then these aren’t necessarily for you, they’re more of an all round iron that suit most golfers. If you want a big iron head to fill you with confidence these are not quite that either, they are more of a stylish, classic shape.

The Ping G Le2 range is designed for somebody to buy the whole bag of clubs that match in colour and in performance. 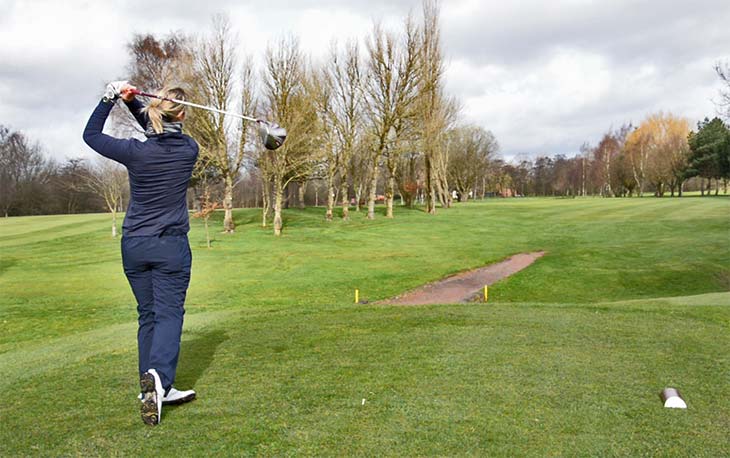 Some women will want a different colour to men, others won’t. If you don’t, then Ping offer a comprehensive range of what can be called ‘men’s clubs’ but really can be custom fitted to anyone. I like the colours and the set fits well together.

Does it have as much technology inside it as the men’s? No. Is it more recognisable in your bag and on the tee? Yes.

These clubs fit right in the middle of the women’s golf equipment market, as it clearly features the feminine colours (like the TaylorMade Kalea) but still isn’t backed up with quite the same level of technology as the men’s range (such as the TaylorMade SIM2 or Callaway Epic Speed models). 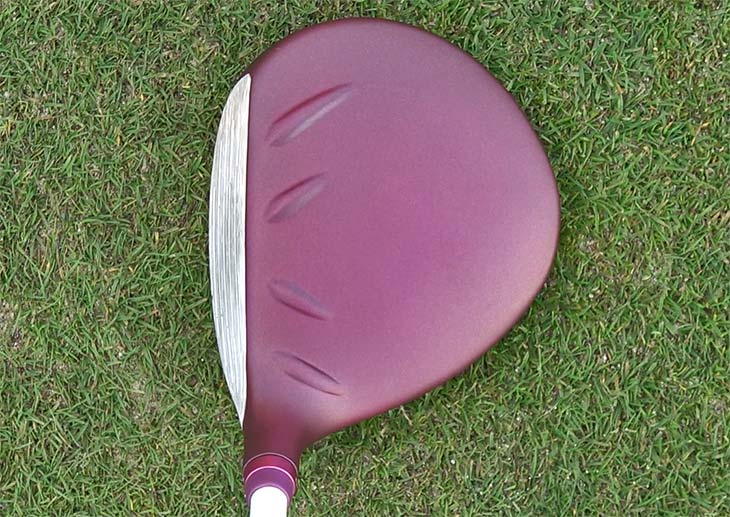 The price probably reflects this position in the market. It’s a great all-round range, but the individual clubs themselves probably aren’t quite the best you can get.

Who Are They Aimed At?

These clubs will suit a beginner to mid handicap female golfer. The shaft options are for a slow to medium women’s swing speed, if you swing the driver over 85mph then you will want to look at the men’s clubs.

These are ideal as a gift for somebody who wants a set of clubs that you can start and progress with for years. 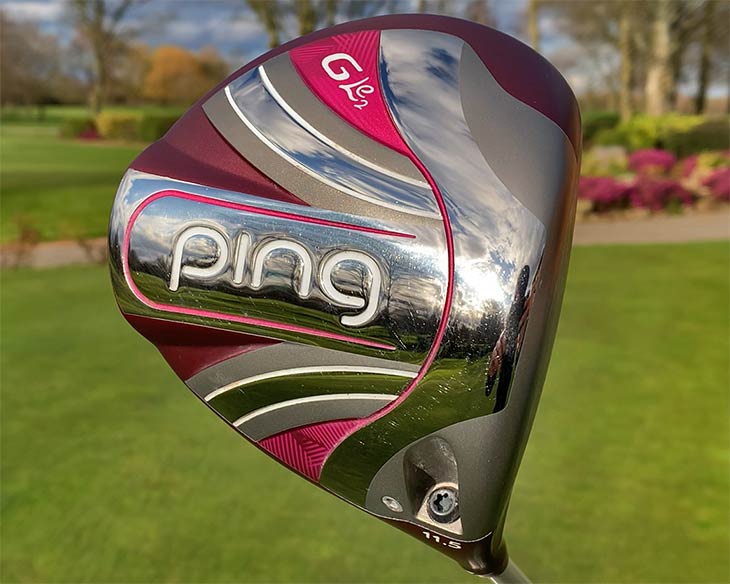 If you enjoyed this review, you may also like: