COBRA Golf has launched its new AEROJET range of drivers, fairways, hybrids and irons, all of which will be available at retail from February 10.

The AEROJET driver family builds on the design and performance attributes of the previous LTDx line up and debuts a bold new aerodynamic shape in all three models – the AEROJET LS, AEROJET, and AEROJET MAX to deliver faster clubhead and ball speed. Each driver features PWR-BRIDGE Weighting Technology, the company’s first ever suspended weight design. The new technology utilizes an internal bridge structure that is elevated above the sole to achieve a low, forward centre of gravity.

The advanced aerodynamic shaping of the AEROJET drivers is the product of years of research and testing with some of the fastest swings on the planet. When compared to a traditional driver, the AEROJET LS, which features the most aggressive aero shape of the three models, features a streamlined frontal area, raised aft and skirt, and a more curved crown with a peak that is moved as far from the face as possible.

These design attributes contribute to a significant reduction in drag through the swing for increased clubhead speed and superior aerodynamic performance.  When tested against the LTDx LS, the AEROJET LS driver produced up to 1.5mph more clubhead speed during robot testing, making these new designs the fastest and most aerodynamic COBRA drivers to date. The family of drivers uses progressive aerodynamic shaping and unique weighting configurations to produce the fastest clubhead speed possible, while achieving specific mass property targets for different golfers.

The standard AEROJET driver is designed to appeal to the widest spectrum of players and features aerodynamic shaping for faster club speed with one weight port in the rear of the sole, providing a neutral shot shape and an impressive combination of forgiveness and speed for maximum distance.
It blends low spin performance with added stability and slightly higher launch than the LS model, using a fixed back weight (12g),

The AEROJET MAX, which is offered in designs for men and women, blends aero shaping with maximum stability and optional draw bias, allowing players to tune trajectory using adjustable weight ports in the rear and heel of the sole. By placing the 12g weight in the rear and the 3g weight in the heel, the player experiences super stable high trajectory with a small draw bias. When the heavier 12g weight is placed in the heel position, performance becomes exceptionally draw biased with good stability for forgiveness.delivers maximum forgiveness and trajectory height through an adjustable back and heel weight (12g & 3g) that can also be used to deliver a draw-bias when the weights are flipped.

PWR-BRIDGE Weighting – a 13g structure that is suspended above the sole like a bridge, to position the CG forward for maximum speed and low for reduced spin, while enabling a more flexible sole structure for improved energy transfer. The elevated PWR-BRIDGE design was critical to make room for the PWRSHELL Face Insert, which debuts for the first time in a COBRA driver, delivering a larger Sweet Zone for faster ball speed across the face.

In conjunction with the PWRSHELL, the insert features a new Highly Optimized Topology Face variable thickness pattern. HOT FACE was designed using artificial intelligence and features multiple zones with optimized thicknesses and shaping to deliver more efficient speed and spin across the entire clubface. A thin ply carbon fibre structure, which is 30% thinner than normal carbon fibre, is utilized in a raw finish in both the crown and sole resulting in freed up discretionary weight to be positioned lower in the clubhead, effectively lowering the centre of gravity location to near zero for improved launch and spin characteristics.

“The aerodynamic package in the new AEROJET family of drivers is our most advanced to date,” said Mike Yagley, Vice President of Innovation, COBRA Golf. “We continue to balance the aggressive streamlining with optimum mass and resilience properties to give players maximum club head speed and ball launch characteristics for increased distance.”

The Cobra AeroJet drivers all have an RRP of £429 and go on sale from February 10. 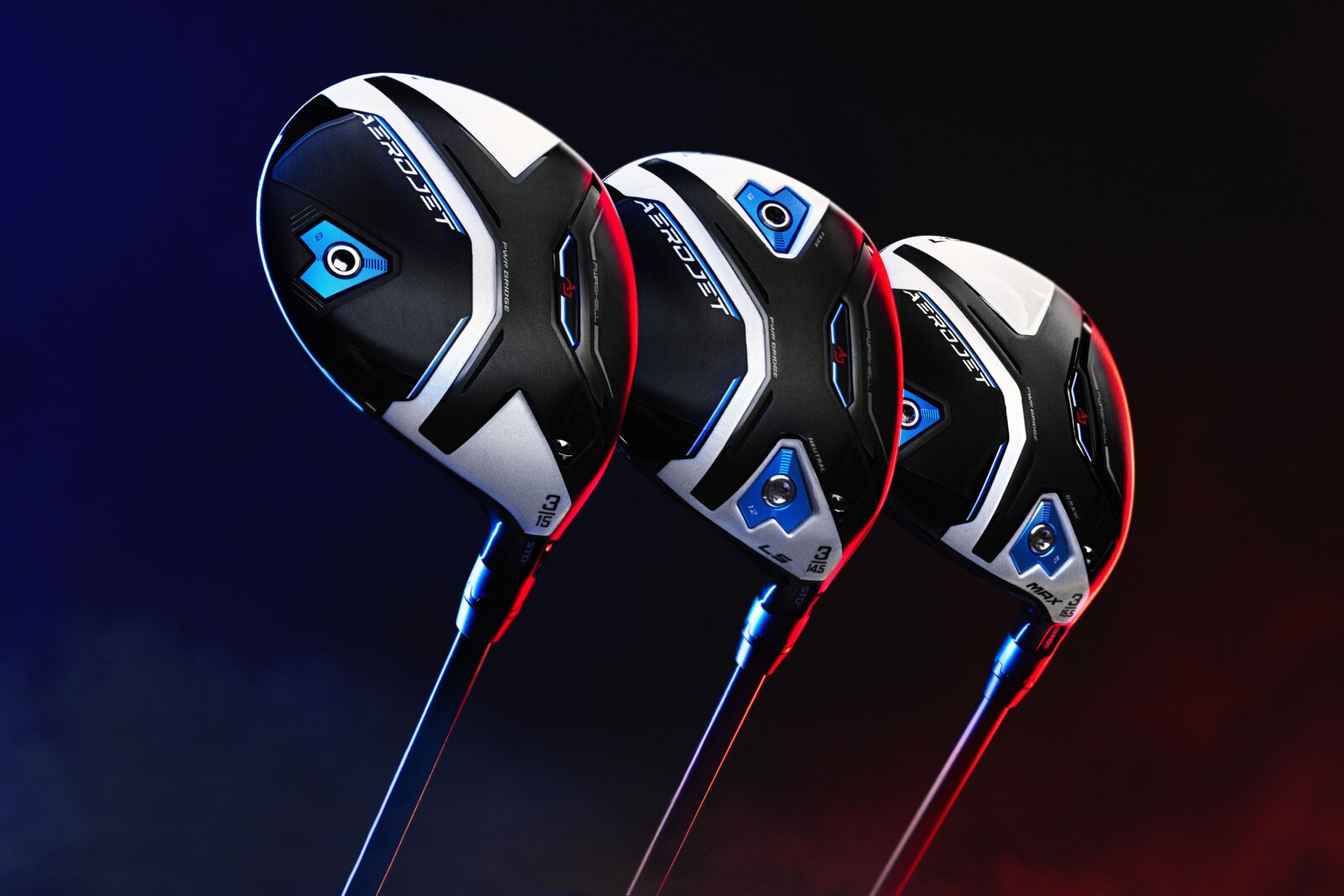 Complementing the AEROJET drivers are a full lineup of fairway metals. Utilizing the same PWR-BRIDGE weighting, and PWRSHELL with HOT FACE, and carbon fiber crown technologies as the AEROJET drivers, COBRA engineers were able to shift the centre of gravity forward for more speed and low spin while also creating a more flexible face and sole area to maximize speed and distance. Also available in three models, the AEROJET fairway metals are designed to fit the full spectrum of players.

AEROJET LS Fairway
COBRA’s low spin fairway model is designed for players with faster swing speeds and uses forward weighting to produce lower, workable trajectories. PWR-BRIDGE weighting and PWRSHELL H.O.T. FACE Technology work in tandem to maximize energy transfer through a low, forward CG and a more flexible face and sole area. A lightweight carbon crown with a striking raw finish saves weight that can be shifted low and forward to create a more playable clubhead.  An adjustable weighting system features two forward weight ports with 12g and 3g weights that can be positioned in the heel or toe to fine tune fade-bias.
It is offered with the MCA KAI’LI White 70 shaft in stiff and x-stiff flex, and a Lamkin Crossline grip. Loft offerings include a 3W which his adjustable between 13° and 16°), and a 5W which is adjustable between 16o and 19 o ).

AEROJET FAIRWAY
The standard AEROJET model is aimed at the widest variety of players looking for easy launch, long distance, and ample forgiveness.  A 12g fixed weight is positioned in the rear of the sole for added forgiveness and high launch, while the PWR-BRIDGE and PWRSHELL HOT FACE Technology provide faster ball speed through a low, forward CG and a more flexible face and sole structure. A lightweight carbon crown further contributes to the low CG by removing weight from the upper portion of the clubhead.
The AEROJET fairway is offered with a choice of UST Helium Nanocore 5F2 in Lite flex or KAI’LI BLUE 60 in regular or stiff flexes. Loft offering include 15 o (3W) which is adjustable from 13.5 o to 16.5 o, 18 o (5W) adjustable from 16.5 o to 19.5 o, and 21 o (7W) adjustable from 19.5 o to 22.5 o.

AEROJET MAX FAIRWAY
COBRA’s most forgiving fairway combines the fast and forgiving performance of the standard AEROJET model with additional launch and draw bias.  An adjustable weight system features 12g and 3g weights that can be positioned in the back or the heel of the sole to fine tune between forgiveness and draw.
PWR-BRIDGE weighting and PWRSHELL HOT FACE Technology again deliver the fastest ball speed possible using low and forward weighting and an optimized variable thickness face design, while a carbon crown helps lower the CG location for higher launch. Shaft choices include UST Helium Nanocore (5F2 Lite or 5F3 Reg flex) or KAI’LI BLUE 60 in stiff flex.
Loft offerings include 15.5° (3) adjustable from 14° to 17°, 18.5°  (5) adjustable from 17°  to 20° , and 21.5° (7) adjustable from 20° to 23°.

The Cobra AEROJET fairway woods all have an RRP of £269 and go on sale from February 10.

Aerojet Hybrids feature a new shape with lower heel, more rounded crown, and slightly raised aft, as well as the same PWR-BRIDGE weighting and PWRSHELL HOT FACE Technology as the AEROJET drivers and fairways.
The AEROJET ONE Length Hybrid is designed in a shorter set up (37.25”) that complements the ONE Length irons in a combo set but is also a favoured option by many non-ONE Length players for its high launching and forgiving performance.

The Cobra AEROJET Hybrids all have an RRP of £219 and go on sale from February 10. 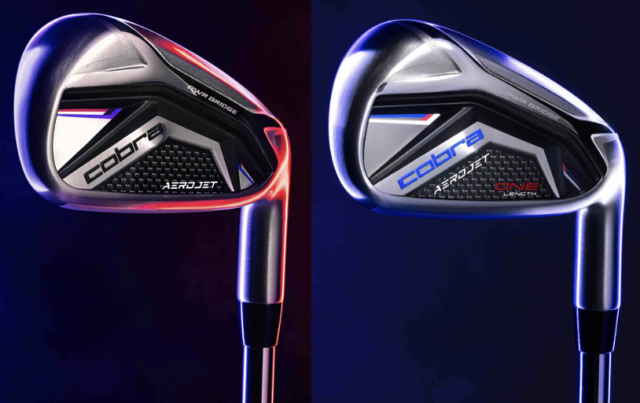 The new AeroJet irons feature a sleek new design with a refined topline, and several distance-enhancing technologies including Cobra’s new PWR-BRIDGE weighting design that evolves upon the PWR-COR in LTDx to optimize weight distribution and flexibility for unleashed power and distance.

The new PWR-BRIDGE design is an engineering breakthrough that achieves the perfect blend of low CG and fast ball speed using an innovative floating weight design. COBRA engineers discovered that they could achieve the benefits of low CG, added face and body flexion by creating a separate weight that is untethered that is called PWR-BRIDGE. The PWR-BRIDGE design comprises a 70g steel weight that is completely separated from the face, body and sole of the iron.  The design positions the CG low to optimize launch and creates room for the body structure to flex freely around the PWR-BRIDGE, resulting in unprecedented ball speed and distance.

Together, the PWR-BRIDGE and PWRSHELL, and HOT Face designs produce up 10% more face deflection than LTDx, resulting in up to 1.8mph faster speed and up to 3.5 more yards of total distance when tested on the robot.  To improve overall feel, a Polymer Feel System is incorporated using an injected polymer filler that encases the hollow area around the PWR-BRIDGE weight to damp vibration for a soft, forged-like feel and sound at impact.

The new AEROJET Irons are available in both Variable and ONE Length options, allowing players to choose between a traditional setup that they’re used to, or a ONE Length configuration for a simplified setup and swing for improved consistency.

Spirit of the Game: Pete Brown